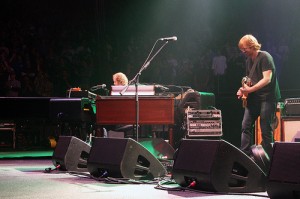 On the 4th of August 2013 the popular American rock band Phish will be seen live in concert in San Francisco. The band will be performing live at the Bill Graham Civic Auditorium. The band is known for their innate ability to span across the entire realm of music by dabbling in jazz, rock, progressive rock, funk, blues, country and many more styles. Some of their greatest hits are included in their concerts and their concerts are known to be unique as they present the fans with various song line-ups.